We had a teaser during the holidays. A nice little batch of loot to whet our appetite.

I'll be keeping an eye out for the actual MacHeist III. Say what you will, I've managed to get some rock solid apps at reasonable prices through these events. It's a nice community on the forums as well. If you stop by and sign up now you can get your hands on Jumsoft's Process just for signing up.
Posted by MacMuse at 10:28 PM No comments: 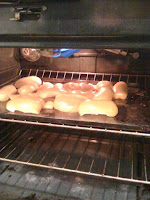 My sleeping patterns have been all out of whack since the holiday break. Of course, it doesn't help to start a project of yellow pepper soup at 8:30 PM on a Saturday night.

The broiling and peeling of the peppers takes a bit of time. Luckily, the end result is mighty tasty. I did a dumb thing though, I decided to do a really large batch. One blender-full the last time just wasn't enough. I should have counted, but I didn't, so I don't know how many peppers I had total. It was more than 25 though.

I started with a recipe I'd found on a search in Google. The recipe I used to use is archived away on a hard drive in an old 386 PC. No idea at all where that's gotten to. It used to be in my kitchen in our previous house but I haven't seen it in years. I kept all my favorite, tried-and-true recipes on it. Ah well. So, the internet age to the rescue. I like this recipe better, actually. Though I must admit I didn't follow it exactly. I didn't have some of the ingredients so I substituted.

I'm making use of a great piece of software now, MacGourmet, on a much newer computer (a MacBook Pro). It's leaps and bounds ahead of the old software I made use of years ago to keep my favorite recipes.

I did have yellow peppers and potatoes but the rest varied a little. The original recipe made far too little soup for the effort and most recipes that call for "salt and pepper to taste" never receive the salt in my kitchen. I have found a great vegetable stock mix that has enough s 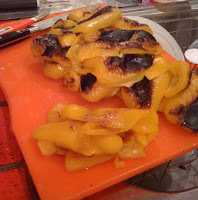 odium to suit me and I don't add more.
Don't let a lack of the listed ingredients put you off from trying a recipe if you have stuff that might be "close enough". The recipe I found called for 1/2 a small yellow onion. I didn't have it and I don't generally cook frequently enough to only use 1/2 of an onion. I messed pretty heavily with the recipe but it came out quite well.

Yellow Pepper Soup
the big batch with what I had available

3 tablespoons olive oil
2-3 small carrots (or in my case 40-45 baby carrots ;-), peeled and diced
4 medium baking potatoes, peeled and diced
6 green onions and 1 leek chopped (hey, it's what I had. I wanted to use all leeks but someone beat me to them at WholeFoods that day, literally right as I went to get the leeks - she had 4 in her basket and there was only one left)
Approx 5.25 pounds yellow peppers - broiled and peeled
3 teaspoons Seitenbacher powdered vegetable broth with seasonings (thank you Amazon case pricing Seitenbacher Vegetarian Vegetable Broth and Seasoning, 5-Ounce Canisters (Pack of 6)

)
4 cups water
Parsley or other garnish

Cut peppers into quarters, clean seeds out and place on cookie sheet skin side up. Broil until skin starts to crisp — don't be afraid to let it burn. It will peel so much easier if you do. Allow to cool a bit (don't burn your fingers!) then peel.

If you use baby carrots, no peeling necessary just dice and set aside until you have the vegetable stock started. Otherwise, peel and dice your small carrots. Chop the green onions and shallots. Go as far up the stems as you like. This will all be cooked down and puréed but too much green does potentially make the yellow soup look odd (little tiny flecks in the soup). (-; 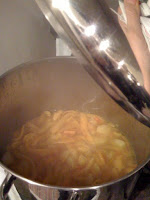 In a stock pot, combine the olive oil, water and powdered vegetable broth, add the carrots, green onion and shallots to simmer while you peel and dice potatoes to add to the stock. Slice the peeled peppers into strips, add to stock pot. Simmer until potatoes are thoroughly cooked (fall apart when you stab 'em with a fork).

Purée in a blender or food processor. Garnish if you'd like or just serve it up hot, as is.

My method was to peel some peppers, work on the other veggies for the stock and then go back to the peppers. Once you have the peppers peeled they are a little like handling slippery yellow fillets.

I had 3 cookie sheets of peppers to roast under the broiler. I started out with the peppers just in half, that didn't allow the sides to broil well enough and peeling was a pain. By quartering the peppers the skin came off much more easily. The last pan of peppers was a snap — I'd finally gotten the hang of it by then. 'bout time, it was nearly 1AM and I still had to simmer and purée the darned soup!! (-;
The iPhone works pretty well for quick snaps, even over a steamy pot of soup, no? Not the most perfect, foodie magazine quality shots, but serviceable when I can't find a better camera while I'm cooking.
Posted by MacMuse at 8:37 PM No comments: